Zoho Campaigns is a cloud-based email marketing and SMS marketing software from Zoho's suite of applications. This product enables businesses to reach out and engage with their customers by automating the marketing process, from the creation of custom email-based and SMS campaigns to maintaining and segregating lists for sending, automating, and analyzing emails and SMS. Zoho Campaigns lets users create email campaigns using either pre-defined or customized templates. The system features mass mailing to lists, including the tracking and reporting of emails and SMS campaigns to improve audience engagement. Zoho Campaigns provides integration with third-party applications like Sugar CRM, SurveyMonkey, GoToWebinar, etc. It also provides integration with in-house applications like Zoho CRM, Zoho Meeting, Zoho Survey, Bigin by Zoho CRM, etc. Users can share their campaigns on social media platforms. Zoho offers a forever free plan where 6000 emails can be sent to 2000 contacts. Other plans are Professional, Standard, and Pay-as-you-go pricing plans. Moreover, support is offered via phone, email, and live chat. Now mix your marketing efforts with SMS and email marketing since Zoho Campaigns provides its own gateway for sending out SMS. Broaden your reach by sending short messages to your contacts. Zoho Campaigns' own gateway helps you send messages without even having any third-party integrations. 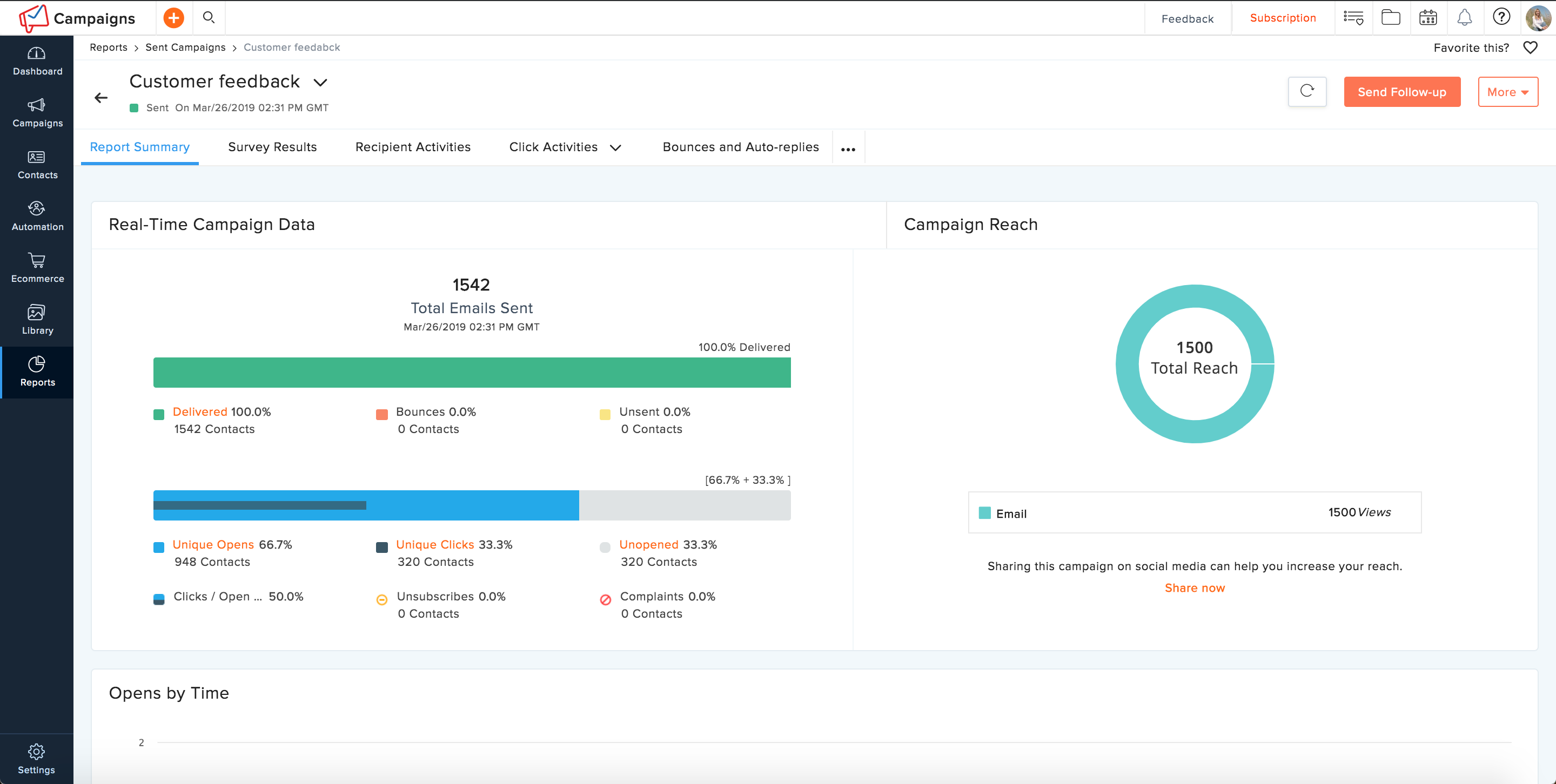 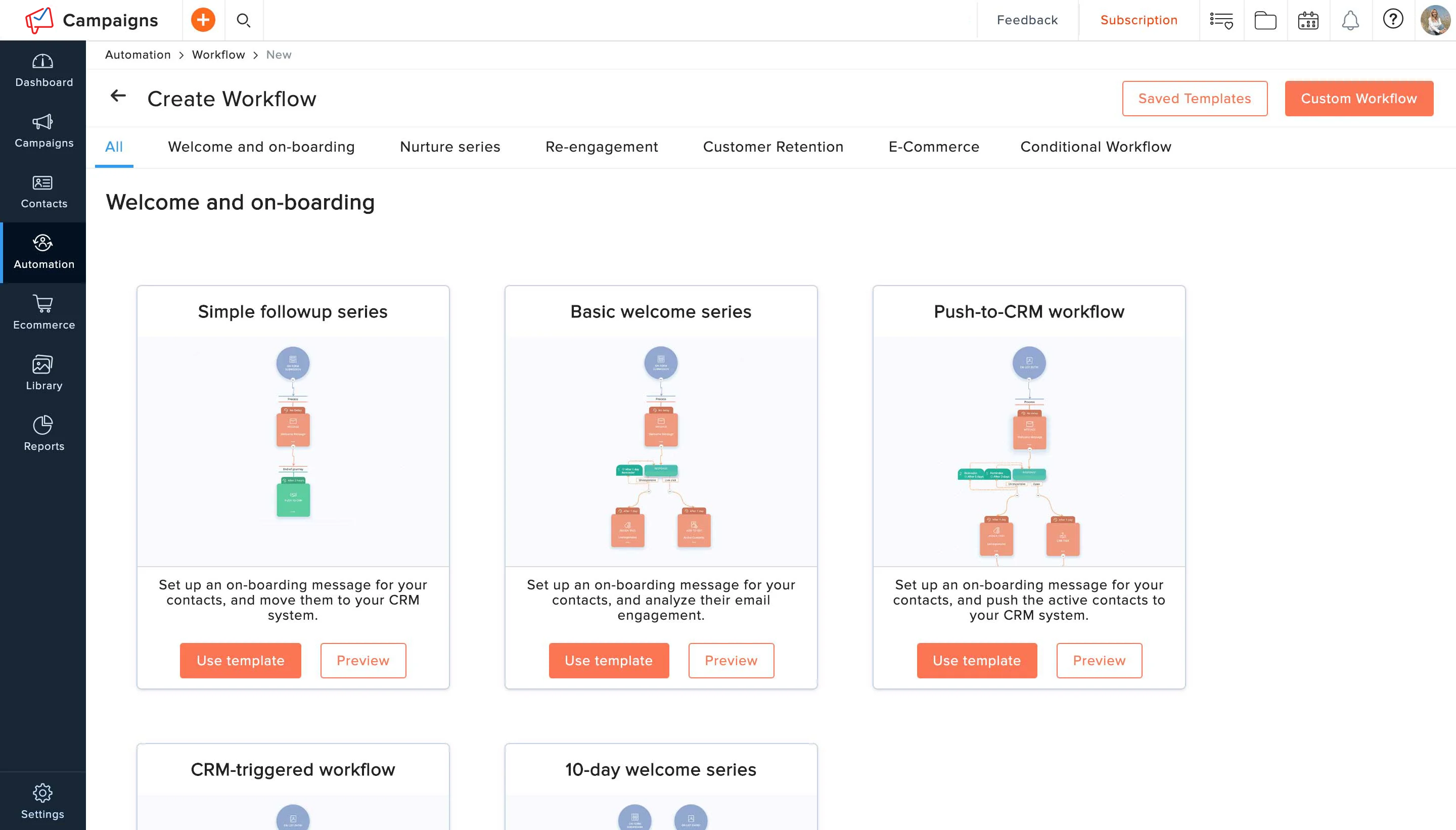 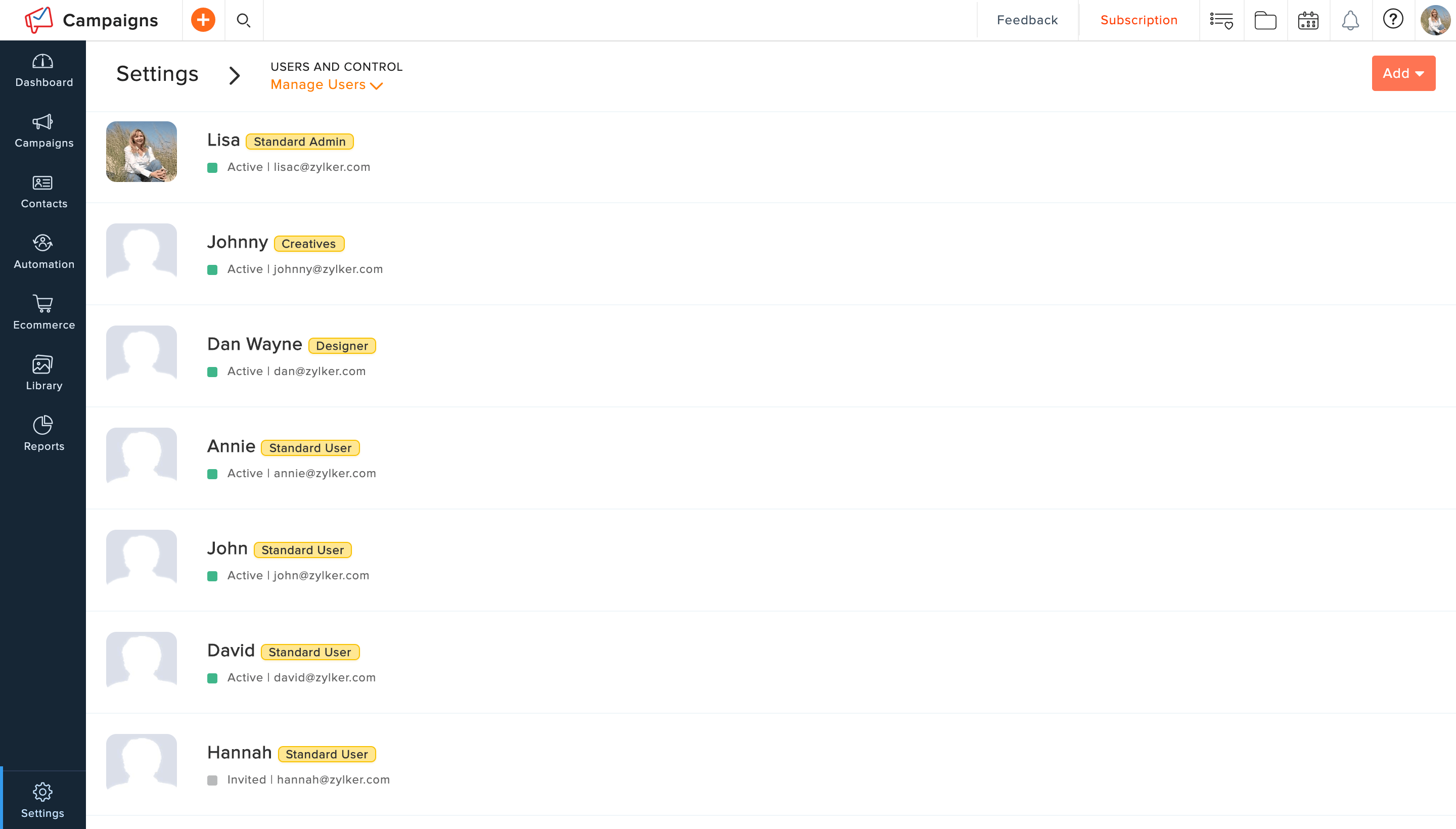 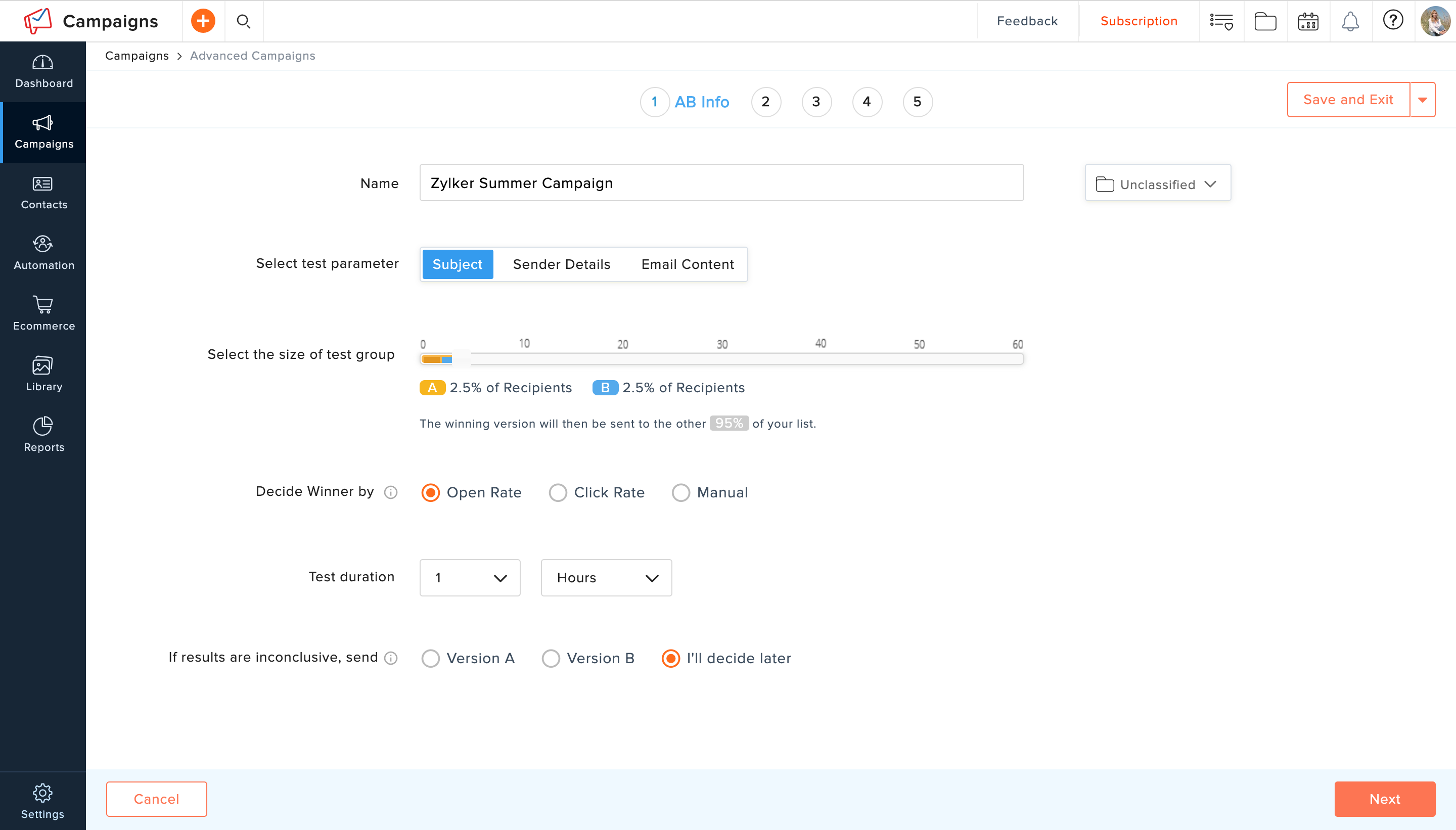 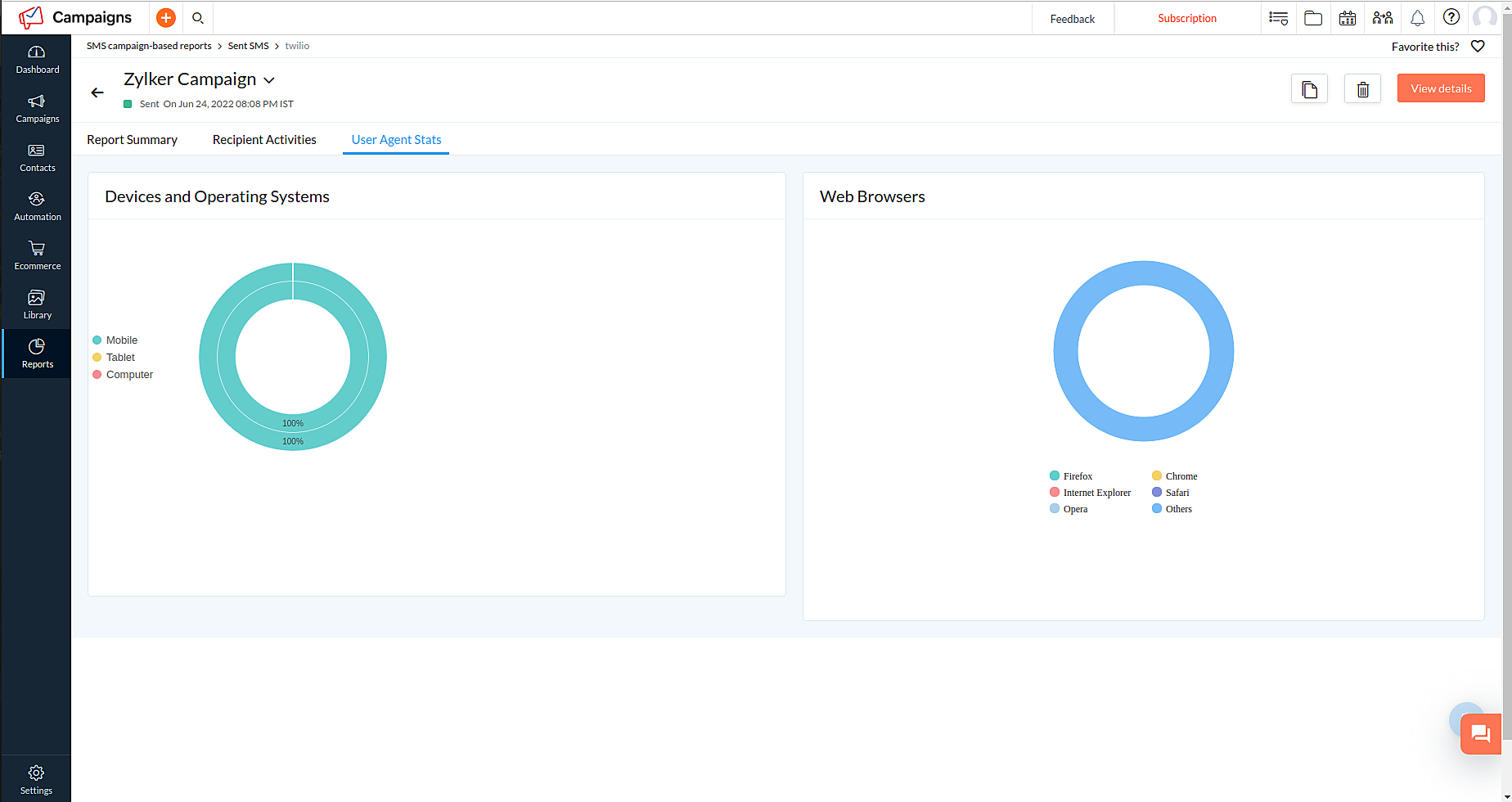 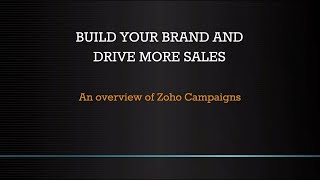 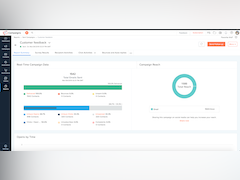 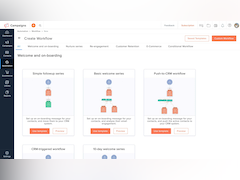 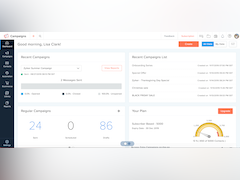 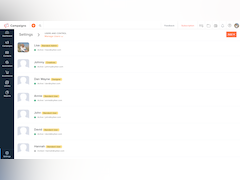 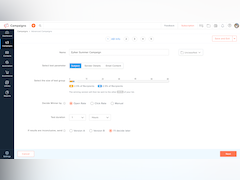 Simplest way to stay connected with all your customers

Zoho Campaigns can easily integrate with other Zoho apps which allows for centralizing all our work. This improves our overall working efficiency

It is very easy to design and schedule email campaigns using Zoho campaigns. The reports are very much extensive which enables us to draw very cool and in-depth insights. Also loading contact lists and segmenting them is pretty awesome and easy.

Honestly, I do not have any dislike for Zoho Campaigns

Wide verity of options available in the tool and their constant improvement of the product. I can campare the tool which I was using in 2009 and the difference now. There are more in terms of features introduced and look and feel of the platform has been changed a lot. This is one of the best Indian based platform for small and medium business

Continues improvement of the product and more number of features available to manage your email marketing campaigns. the ability to test the dynamic content is one of the good feature they added to the list. Predefined automation flow which sync with CRM toll is one of the great feature.

Sometime, the platform runs slow. It's really pain to manage when it perform very slow. Some of the templates looks good on the platform where as the same have issues. Specifically the compatibility across multiple email platforms need to be improved.

We used to face the campaign get block and reason they state as spam. It get hold for some time and we used to connect with support team multiple time.

We started used way back in 2007. That time we used to have all the features for free and Zoho is the first option use to chose and also we were using Zoho CRM before we start using the campaigns.
JJ
Preis-Leistungs-Verhältnis
4
Funktionen
3
Bedienkomfort
2
Kundenbetreuung
3
1
Bewertet am 24.7.2020

From a distance, it looks shiny with a ton of functionality. But when you actually start using it, you'll see a myiad of small aesthetics that don't look right (loading bar doesn't extend full width, loading dots are blurred) and the loading times are among the slowest for any software I've ever used.

Now all of those things are OK, because functionality is what matters the most, right?

This would be true if the functionality of the platform actually worked as intended. We've run into issues like:

-Duplicating a workflow gets stuck and never duplicates. The bug required Zoho team to fix it on their side which took 3-5 business days.
-Changing a font color for an HTML email doesn't work. You'll see the updated font color in the HTML code, and in the email preview you will see the font color you want. But when you send the email, the font color is almost always wrong.
-Their simple condition filter in their workflow component didn't work originally. I had to speak to their engineering team twice to show them the problem, and then they fixed it 5 days later.

The list goes on and on. I wish this program just worked and I didn't have to write this review.

The one good thing about this software is that their customer service team is very responsive, and they normally fix the problems. But again, I feel like I'm a beta tester working with them through all of these bugs.

I don't recommend this software to anyone.

Campains has a lot of features out of the box and is a very affordable option for startups looking for an email solution.

This entire platform is riddled with bugs, quirks, and errors that make your job so much harder. When things don't work, you normally assume you're doing it wrong with most software. Not with Zoho Campaigns.

When things don't work, it's most likely broken on their side. 3 months into using this software every day, and we've already reported 3 different instances where their software was not working as intended.

If I was getting this software for free, that would be OK. But since we're paying hundreds of dollars each month to use it, this is not acceptable.

Because campaigns was cheaper and had similar functionality. Plus, we are using Zoho CRM so we wanted the two programs to have a seamless sync.

All in one Marketing platform

Using and managing campaign with zoho family of apps with zapier and make, It makes my work easier and time saving. Once set on automation enjoy new customers and orders.

From creating a campaign to getting your first customer, it has everything for marketing. Creating an email from templates or create your own design with responsive emails. Easy to integrate it with other zoho family apps, Saas and web services. Also capable of integrating with zapier, monday, Make, airtable and more

Email template editing with html format is a bit tough

My experience with Zoho Campaigns is excellent. Account Manager is helpful solving all my queries. They helped us to set up our account from scratch.

Zoho Campaigns provide excellent support. It is a SaaS based email marketing tool with all automation features. We can create responsive email templates, attractive landing pages, list segmentation and many more. it comes with many integration. We can add calendar option in our mail. It is a excellent for promoting webinar through email.

Analytics is very poor. If they can work on Analytics and bring some advance features, Zoho has the capability to become leader in this segment